From Berlin, the fashion designer who does a not-so-little black dress

I discovered Arrey Kono by chance while strolling through central Berlin. I came across ARREY Berlin, her shop, full of clothes whose unique and noticeably unusual design impresses at first glance.

I walked in and asked the attendant who owned this abstract brand with such inspiring designs. The attendant, who turned out to be the owner’s sister, told me that Arrey was from Cameroon and had lived in Berlin for over 20 years. She was a fashion designer and businesswoman who traveled the world, presenting her designs at the fashion weeks of Paris, Berlin, Milan, London, São Paulo, and others.

My eyes immediately caught a futuristic plissé piece handcrafted with a black fluid fabric. As soon as I wore it, I felt the strength of my feminine power.

Feeling a powerful It Girl by wearing Arrey

To wear the Arrey brand means rediscovering an unapologetic woman who is comfortable in her skin. The brand’s aesthetic is much like Arrey herself. Her restless mind produces a creative, sophisticated, and rare design.

Her pieces impact, marvel, seduce, and fascinate, while her unique style offers no clue for where her designs find their origin. Cameroonian Arrey belongs to the world, and this is reflected in her universal style in Berlin‘s fashion scene.

It is no coincidence that her clothes dress up queens, princesses, women of high society worldwide, and ordinary women like me whose only wealth and power lay in their femininity.

I knew I had to meet this woman in person and hear her story.

Summer passed, and in the late fall, I decided to walk down the street near her store. I went in, and this time, I found her. Our eyes met empathically. At first, Arrey was a little shy, probably because of my sudden appearance, but she agreed to talk to me.

Our meeting evoked the same sense of excellence and creativity imbued by this woman, whose work balances on the fine line between fashion, design, and art.

While she dresses me for a photoshoot with the Berlin-based Spanish photographer Ana Valdívia, Arrey tells me that she is aware of her rare talent. “I hate the spotlight, and I only go to the catwalk because I have to sign my pieces at the end of the show,” she says. Her discretion is at odds with her stark elegance, which she cannot hide even though she tries her best.

No detail escapes Arrey's eyes. What a luxury to be her model for a day!

Arrey possesses a remarkable charisma. Her striking features are enhanced by the crimson lipstick she wears. She begins to tell me the story of her life.

Arrey grew up with her father, an engineer, and her stepmother, a teacher. She started drawing when she was very young. By the age of 4, she was sketching out dresses for the women in her family, but no one gave much notice for her early talent in fashion design. As an adult, she left her home country Cameroon and came to Germany to study language and translation. Today she speaks 5 languages, including flawless German. 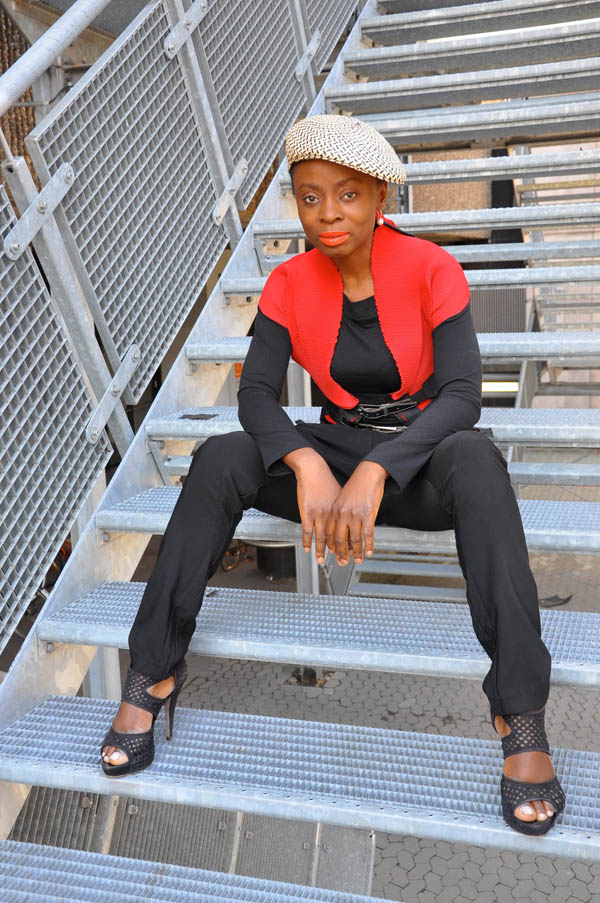 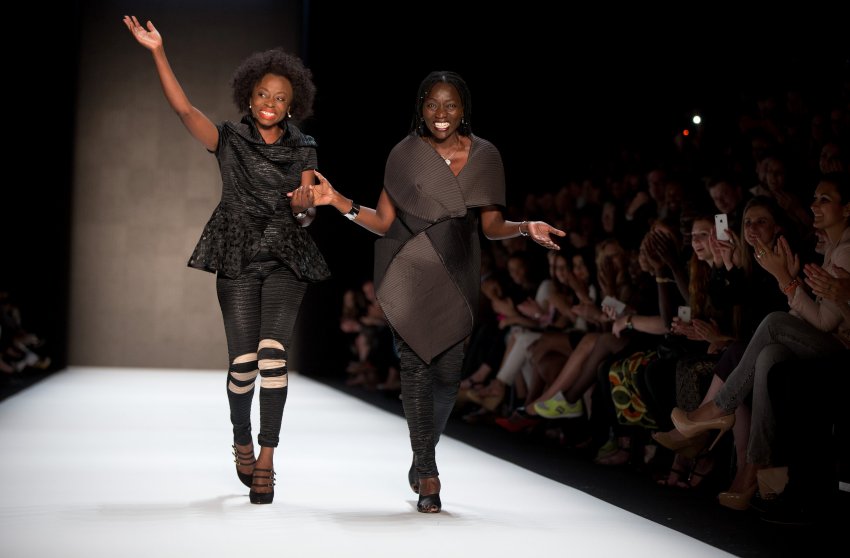 While studying, she supplemented her income by designing and sewing pieces which she sold at fairs and markets around the city. One day, her clothes were seen by a wealthy woman who owned a network of boutiques in the city; she fell in love with Arrey‘s work and invited her to exhibit and sell her pieces in her stores. Arrey's career began to take off.

The future designer soon became a professional translator and mother of a baby boy. She moved to Berlin and opened her brand. None of this happened effortlessly. Arrey faced the typical difficulties of raising a child as a single mother. She had to borrow money to start her own business and knew intimately the challenges of a black woman living in a white world.

"The hardest thing for white employees is having me as their boss,” confides Arrey “Many of them do not accept it at all and believe that I am in the wrong place as a black woman who creates, sells, and builds her own rules.”

During our conversation, Arrey straightens my hair to make it more voluminous. "Short hair is for dead people,” she jokes. The photographer clicks. Arrey backs off. "I'm not a hairdresser, I'm a designer. Please, don't photograph me fixing her hair," she asks. I immediately understand her request. As a woman of color, being portrayed grooming my hair could easily lead viewers to mistake her as the hairdresser rather than the designer accountable for clothes I am wearing. A picture speaks more than a thousand words.

The photographer respects her request and I learn one more lesson from a woman who is an expert in imposing herself and securing her role in a world where she is determined to occupy herself.

Arrey credits her success to this maxim: “In Berlin, you get what you give," she says. It is easy to understand what the city gave to Arrey in exchange for what she gave to Berlin. Her shop is located at Hackesche Höfe, a trendy address in the city center, and her clothing catches the attention of passers-by who are willing to spend at least a thousand euros on a single piece.

An outfit that hugs your feature and accentuates your assets.

This is a place where Berlin's multiculturalism is on display, and one realizes how open this city is to different expressions of art and fashion. Berlin is a city that opens its arms to the unusual and not "universal" (in quotes, because day by day, this concept becomes meaningless in a world so full of diversity).

Clients from all races and social backgrounds appreciate Arrey's work by taking her garments to the four corners of the world. She does not dazzle at all. She sees her talent as something natural, and in possessing it, she can generously share it with other women. Thus she financially supports herself and enjoys the pleasure of delighting other women like me with her art.

Arrey generously allowed me to choose the piece I wanted for the photos that would accompany this article and after seeing my look of enchantment, she gifted me with a garment that will occupy a special place in my wardrobe.

Our empathy was almost immediate. Two black sisters united by the black diaspora sharing stories that are common in our daily lives, for the simple fact that society sees the color of our skin as a reason to try to hold us down. Stubborn women we are, we resist and contradict the world. Therefore, we identify with each other.

Arrey and I after fun and luxurious change of clothes

Arrey warmly welcomed me, offering her story and allowing me to reflect on why women like her fascinate me. I conclude that in a world that represents too few black women like Arrey, knowing her serves as a balm to the wounds that come with determinedly occupying places with our history, our expertise, and our talents.

Arrey on one of her classic plissé piece handcrafted. Look at the power of this woman!

In and out of the catwalk, Arrey politicizes Berlin‘s fashion scene, spreading black excellence in designs that do not excuse themselves to be great, legitimate, and 100% original. Black is beautiful in Berlin.

Give me reasons to learn a new language